For Alfa Romeo, the 6C 2500 was the swansong of its era. When it debuted in 1939 as the third series of Vittorio Jano’s legendary inline six-cylinder Alfas, the engineers involved could never have imagined that it would signal the end of the line for hand-built Alfa Romeos.

Thanks to engine upgrades and a vastly improved fuel delivery system, the 6C 2500 was the first road going Alfa Romeo capable of 160 km/h. Additionally, it benefited from four-wheel independent suspension, with parallel trailing arms and coil springs in the front and swing axles with torsion bars at the rear. The 6C 2500 was immediately met with praise and success from its hand-selected upscale clientele. Alfa Romeo was, of course, still in the business of providing rolling chassis to custom coachbuilders, even as the onset of war loomed.

The outbreak of war in Europe would limit production of the 6C 2500 to only a few hundred examples during the years of conflict, however, at the end of the war, the 6C 2500 offered Alfa Romeo the opportunity to re-launch its manufacturing efforts by returning to its advanced pre-war design. The first project created after war’s end was the factory-offered 6C 2500 Freccia d’Oro, which had essentially the same running gear as the pre-war 6C 2500s.

As Alfa’s post-war cars followed pre-war practices, so did the coachwork of Turin’s Pinin Farina, although the art deco obsession faded somewhat. Thus, post-war bodies omitted much of the brightwork, which allowed for their handsome lines to make their own statement.

Few automobiles rival the elegance and racing lineage of the Alfa Romeo 6C 2500. The 6C 2500 became one of the most expensive and refined cars of its era, attracting worldwide celebrity clientele, particularly the highly desirable top-of-the-line Super Sport Cabriolet. Only 383 6C 2500 Super Sport’s were built from 1947 to 1951 and just 63 examples were fitted with a Pininfarina 2-seater cabriolet coachwork.

Born in Reggio Calabria, Italy, in 1901, Goffredo ‘Freddie’ Zehender was one of the famous Italian privateers in the 1930s Grand Prix era. Zehender started his driving career in 1925 and became a works Alfa Romeo and Scuderia Ferrari driver. Zehender has a quite impressive racing record, entering the first 5 editions of the Grand Prix de Monaco in a row (3 times top 5 finish). After WWII Zehender ran car dealerships in France and Italy and became team manager of ‘Scuderia Inter’. 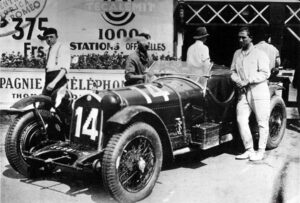 According to the Alfa Romeo archives, Goffredo Zehender was the first owner of this specific Alfa Romeo 6C 2500 SS Pinin Farina in April 1949. At that time he lived in Torino, Italy. As Goffredo was changing cars very often, he kept the car not for a long time. In the 60’s the car went to France and was bought by a team commander of Patrouille acrobatique de France (Aerobatics demonstration unit of the French Air and Space Force). During this ownership, the decision was made to repaint the car in French blue, probably to match the French Air Force. In the early 90’s the car was bought by Mr. Paul-Emile Bessade, a racing enthusiast from France. Mr. Villanova (Barcelona, Spain) acquired the car in December 2000 in Paris. Mr. Vilanova participated with this car in the 2011, 2012 and 2014 Mille Miglia. Vilanova and Till finished 3 times in the top 100. At this time, the car was still blue.

Very recently the last owner decided to bring the car back to splendid original condition to participate at Pebble Beach and in the best Concours events worldwide. The car was not ready in time for Pebble Beach. The quality is to concours standards and has been controlled by one of the worlds foremost Alfa Romeo experts. The engine will need running in as the car is 0 km.

This stunning 6C 2500 SS Cabriolet Pininfarina from 1949 with its exceptionally important Alfa Romeo history is your chance to buy a top quality car without waiting for a 2 year restoration.

This Alfa Romeo 6C 2500 SS Cabriolet Pinin Farina is highly eligible for great events such as the Mille Miglia. If requested, we are happy to support with registration for the (Registro) Mille Miglia.